Mavic Mini is an easy-to-use, affordable flying camera for capturing all your fun. Truly compact, portable consumer quadcopters have been around—but not with the performance of the Mavic Mini from DJI, the world’s leader in reliable, feature-filled drones. Mavic Mini folds to fit in a backpack, jacket or cargo pants pocket and weighs little more than your smartphone. 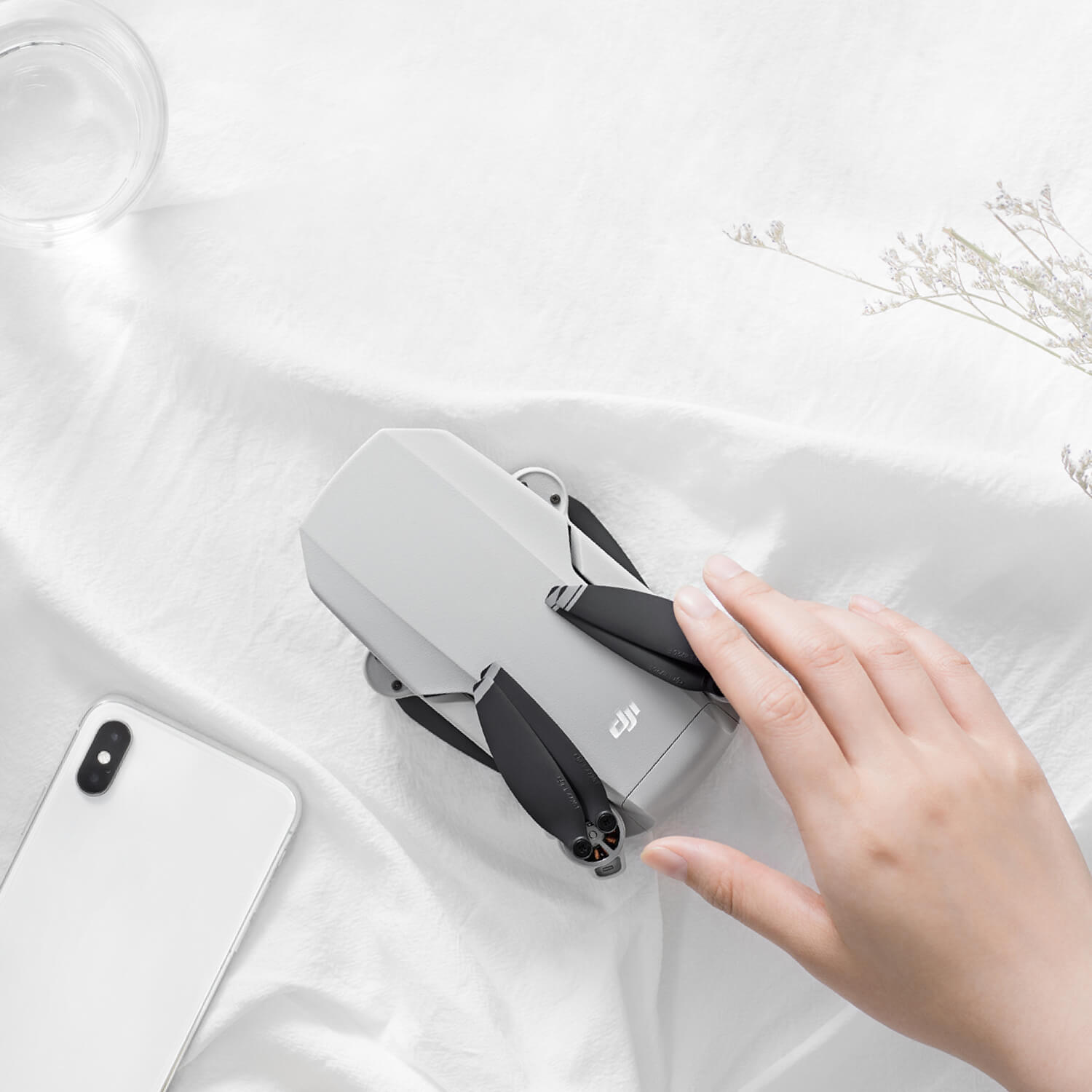 Mini is fast and goes exactly where you want because controls are simple and GPS is built in. It records high-definition, shake-free video and clear still photos, as you’d expect from DJI. And at 249 grams, or less than 8.8 ounces, the Mavic Mini is exempt from federal regulations, so you don’t even have to register it.

Everything You Need To Fly

In addition to the Mavic Mini, you get a remote controller, rechargeable battery, recharging cord, wall-outlet recharger, screwdriver for propellers, and carrying case.

The remote controller links effortlessly to the drone on startup. It uses the downloadable DJI Fly app. Twin joysticks give complete directional control. When you attach your smartphone, you see live video streamed in 720p high-definition, information such as GPS location and speed, and command buttons. Press one button for takeoff, another for landing, one for Return To Home and another to see how much battery power is left.

The controller folds and the control sticks remove for easier storage and carrying. 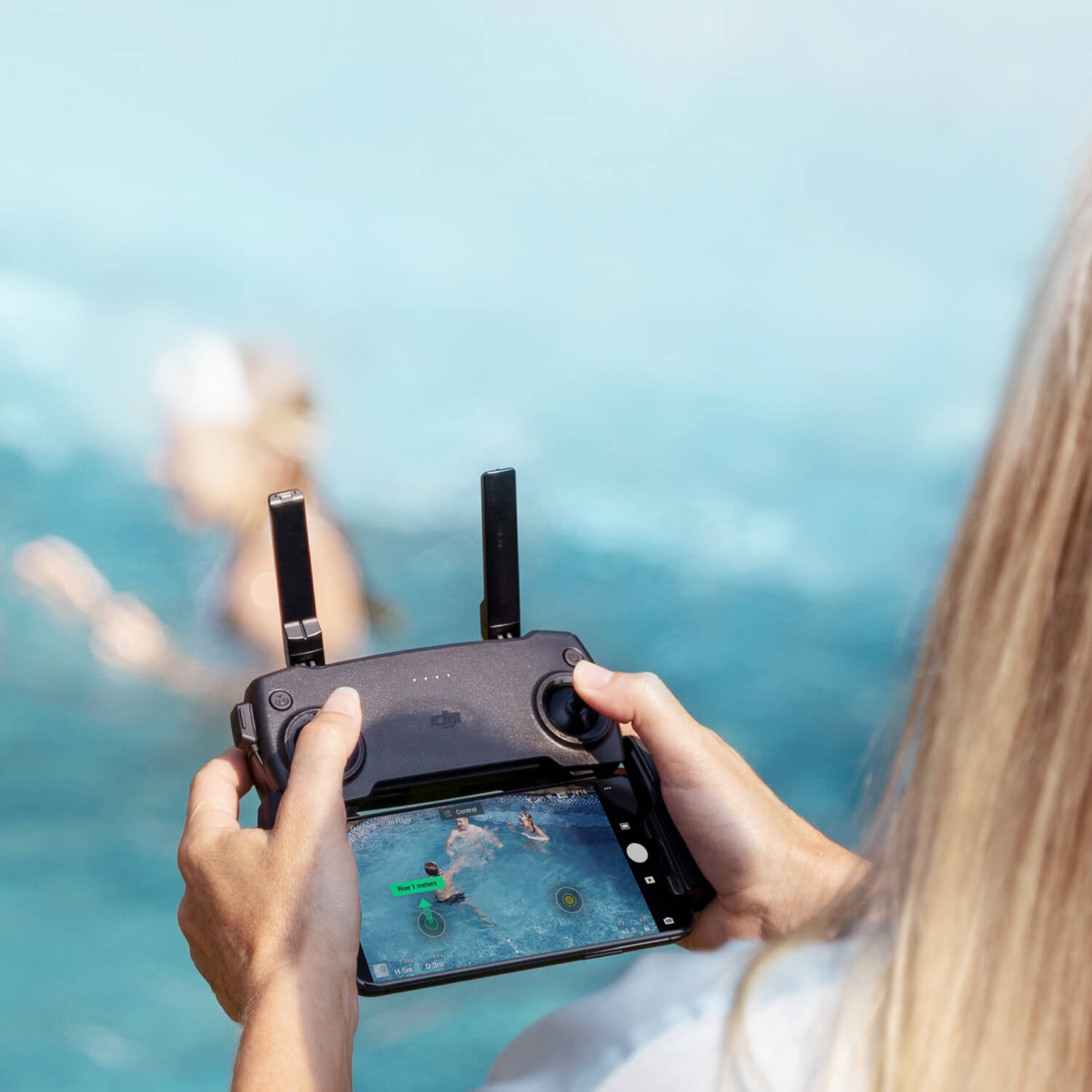 To see what the Mavic Mini sees, attach your smartphone to the included remote controller. The controller adjusts to hold any compatible phone from .255 to .34 inches thick and up to 6.3 inches long. You may have to remove thick cases—no big deal. Phones that operate on iOS v10.0 or later or Android v6.0 or later are compatible.

Save photos and videos to your phone and edit them on the DJI Fly app, then share. 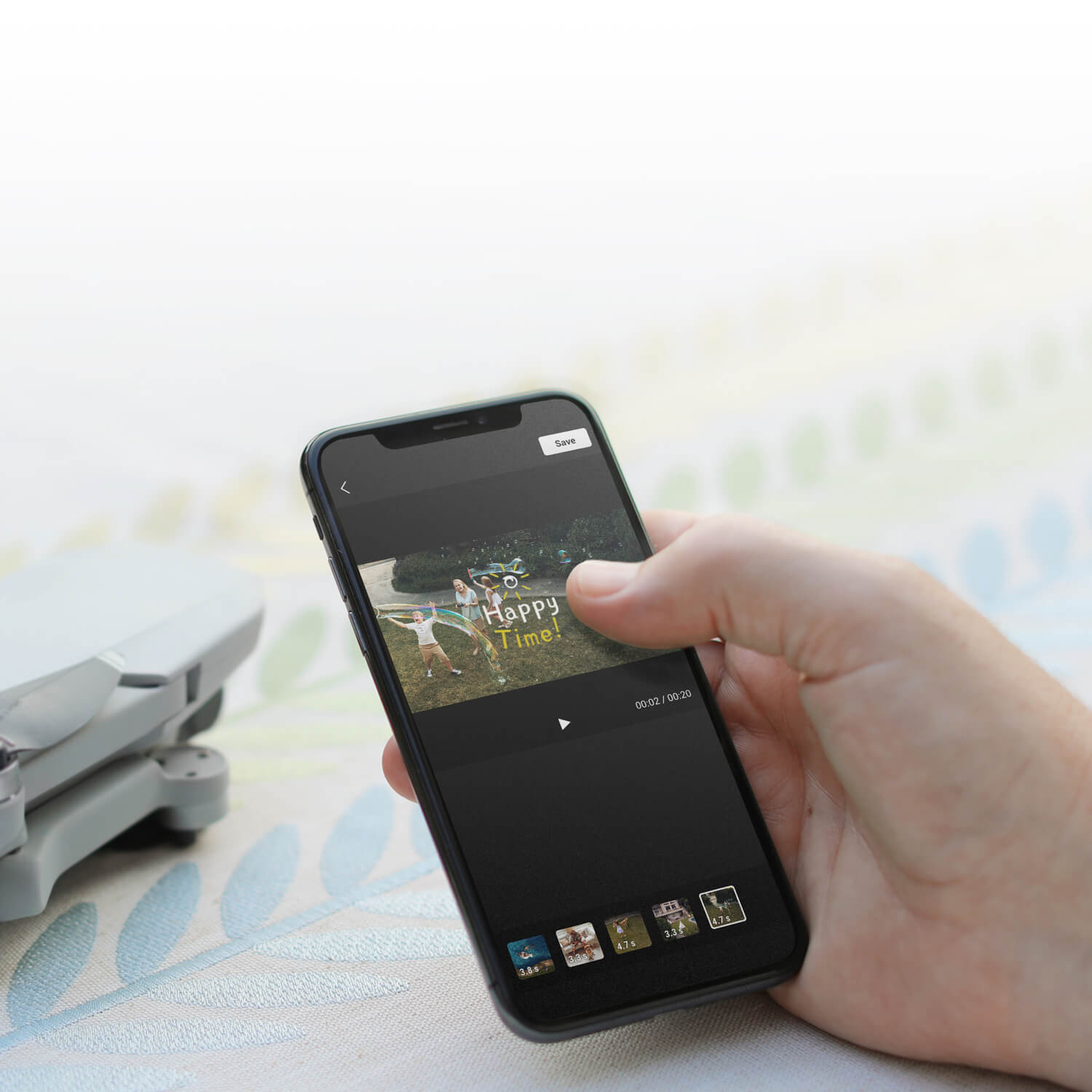 Mavic Mini has a high-performance camera to capture your adventures. Video is recorded in 2.7K high-definition at 30 frames per second. Stills are a sharp 12MP. Shutter speeds as fast as 1/8000 second freeze action. Everything is captured through a big 1/2.3-inch CMOS sensor.

The field of view is 83 degrees from a lens that is equivalent to 24mm in a 35mm format, an angle wide enough to capture big groups and plenty of scenery. Closer shots are accomplished by flying the drone nearer to the subject— when it’s safe to do so.

Mavic Mini’s camera is attached to a tiny motorized gimbal that cancels out drone movements on three axes. Even though the drone may be moving slightly while hovering, the camera is held steady. Video is stabilized, appearing smooth and shake-free. It’s a small-scale version of the same process that Hollywood filmmakers use. Gimbals are more precise than digital stabilization, which is more common on drones in this price range

Mavic Mini’s 12MP stills are crystal clear and blur-free. DJI firmware makes details stand out, not wash out. Colors pop, making subjects look like they do to the human eye. Your girlfriend’s smile will be just as white, your boyfriend’s eyes just as blue, and a child’s hair just as brown and curly as in real life.

Want more than one shot? Mavic Mini’s camera can shoot stills at preset intervals, from every 2 to every 60 seconds.

The DJI Fly app lets you store video and stills in your controller-connected smartphone.

To make Mavic Mini store your photos and video internally, just insert a microSD card that you supply. A card slot is under the battery lid. Slip the card in, then snap the battery cover closed. Cards storing up to 256GB are available.

Using the included DJI Fly app, edit videos and stills to your liking. Add or remove music or apply templates.

Satellite positioning with GPS—the same technology that sends you accurate directions while you’re driving—helps to simplify flight by:

Mavic Mini will help you take creative selfies and other interesting video. QuickShots pilot assist programs do the hard part:

Dronie. The camera locks onto the subject, backs up and flies upward as high as you choose, from 40 to 120 feet.

Rocket. The camera locks on the subject and flies straight up to a distance you set between 40 and 120 feet.

Circle. Set the distance and altitude and Mavic Mini will circle your subject.

Helix. Set the altitude between 40 and 120 feet and Mini will fly up and away to that distance, circling the subject.

Of course, you can manually control the drone if you want a selfie that shows you and your friends or family. Move the drone back to get in more of the scenery that you’re enjoying, or closer for a tighter shot.